I hope you had a fab Monday and an even better Tuesday!

You’ll be happy to know my class devoured the Banana Chip Cookies!  I managed to resist and not eat a single one (except for the one I ate hot out of the oven on Sunday)!

Yesterday, I talked about my lack of February challenge.  Even though I don’t have an official one, I really like Anna’s from Newly Wed, Newly Veg.  For the month of February, she is cutting back on added sugar (it’s in the most unexpected places sometimes!).  This doesn’t include natural sugar in fruits and veggies.

I think this is a great idea!  Out of curiosity, I decided to count how many grams of added sugar I consume on an average day.

I don’t usually post everything I eat but for today’s experiment, here are today’s eats along with the added sugar count. 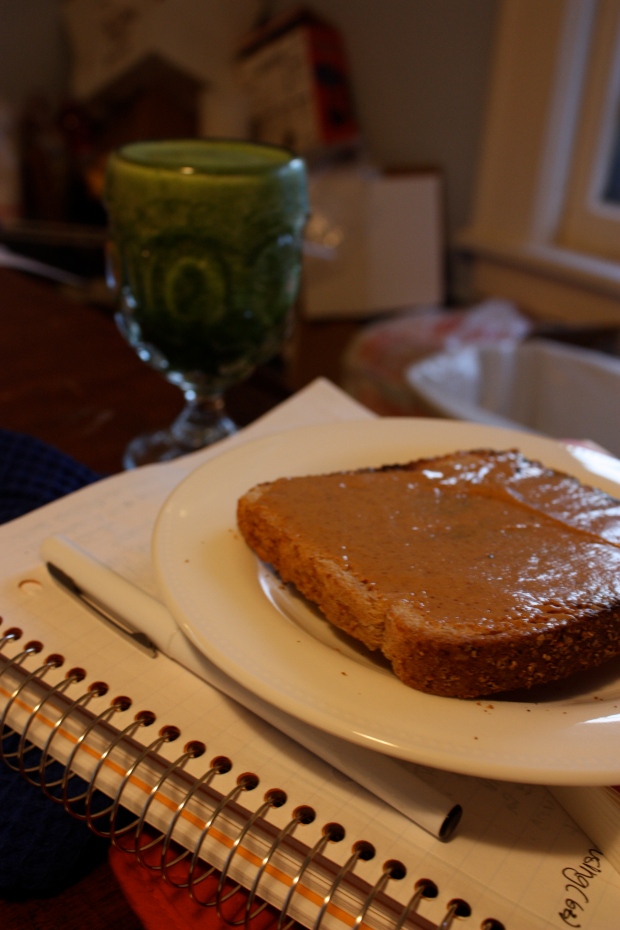 I’m shocked at how much sugar Lactaid has!  7g for 1 cup!  Luckily, I only put 1/3 cup in my coffee each morning!  Actually I sort of knew this… the added enzyme apparently starts to breakdown the sugar in the milk while it’s in the carton.

For mid-morning snack I had an unpictured apple and string cheese: 0g added sugar. 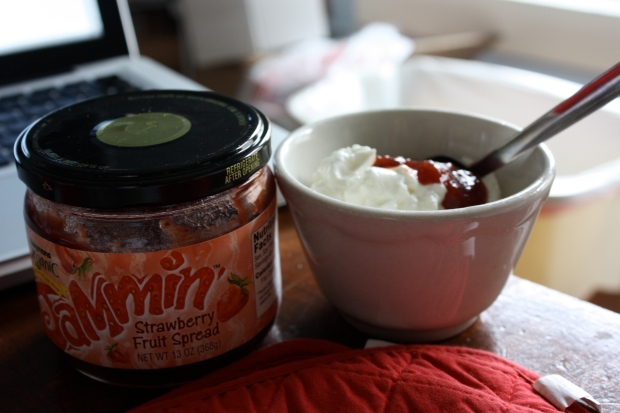 I had no idea plain Greek Yogurt would have 9g of sugar per cup!  It doesn’t taste sweet!

Ugh, I’m pushing through this bread that is not very tasty 😦  Wegman’s you failed me!

After my afternoon snack, I was still starving, so I decided to have the first part of my dinner early.  I started with some Kale chips.

Usually I just use some rice wine vinegar then throw them in the oven for 10 minutes.  But today I decided to try out a sauce that I got from Tina‘s Open Sky dealio she had a few weeks ago.  It was only $0.99 and free shipping so I figured why not.

I think had I seen the nutrition information beforehand, I would have saved my dollar.  A serving (2oz) of this sauce has 120 calories, 2000mg of sodium and 28g of sugar!  Essentially it’s sugar, salt and water.  I’m a little shocked that this was on Tina’s Open Sky page (by no means am I trying to judge!).  I suppose anything is okay in moderation.  On my kale chips I used a little less than half a serving.  Honestly, it did make the Kale Chip ridiculously delicious!

The other half of dinner was a corn tortilla with cheese both of which had 0g of sugar. 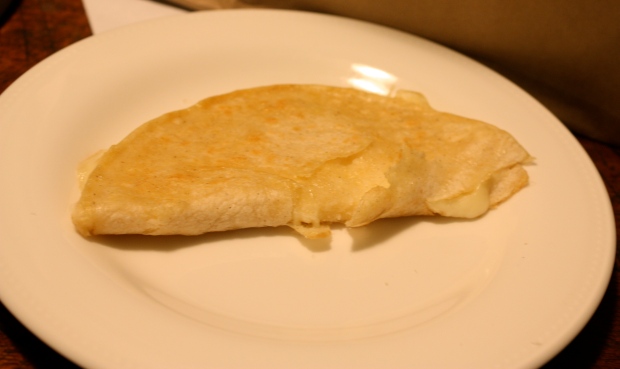 Although I may have something else later, probably a piece of fruit or something…

The Grand Total Added Sugar Consumption for the Day = 35.5g

I’m not entirely sure how to analyze this but it doesn’t seem like THAT much to me.  What are your thoughts?

Is it realistic to not eat added sugar?  Obviously it should be avoided where ever possible but is there such a thing as too healthy?  Any thoughts?

Ugh so much to do tonight!  Hope you’ve had a great day!!

Anyone else SUPER EXCITED about Lost?!?!?!

9 thoughts on “Pour Some Sugar on Me”