I woke up this morning still full from last night!  That African food was dense!  After a Green Monster and some internet perusing, I headed to the gym where I ended up doing 4 miles on the treadmill.  My knees felt fine, probably because I did a run/walk combo (run 2 mins/walk 1 min).

I came home to try something new:

I’ve realized that complex carbs keep me full for longer.  The past two days I’ve come home ravenous after a basically complex carb free lunch!  So I’m going to try to incorporate whole grains and other complex carbohydrates into my lunches to see if that helps keep me from wanting to gnaw my arms off around 4:30pm.

I made a delicious stir fry with a bit of coconut oil, garlic, zucchini, bok choy, scallions and Kikkoman Ponzu. On top of that, I added a chopped up Spicy Chik’n Patty and helping of barley!

Delicious!  Very filling!  Finished off the meal with two cuties and huge cup of green tea!

I basically did nothing today… I went to TJ Maxx to return the fantastic red heels that didn’t fit 😦 and to Target to pick up some cleaning essentials.

Later in the evening, I decided I wanted a labor intensive dinner, because reading wasn’t looking that good… 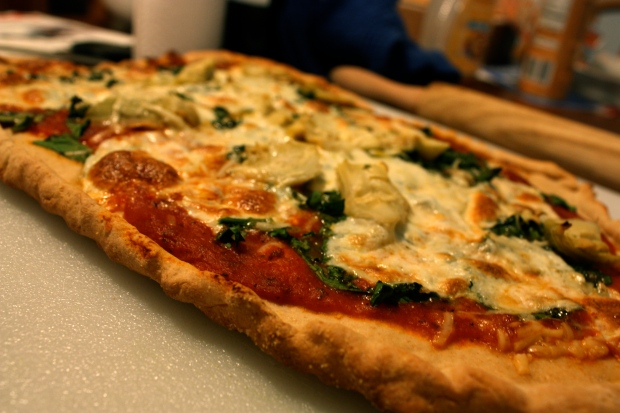 Artichokes make everything delicious!  What are your favorite homemade pizza toppings? 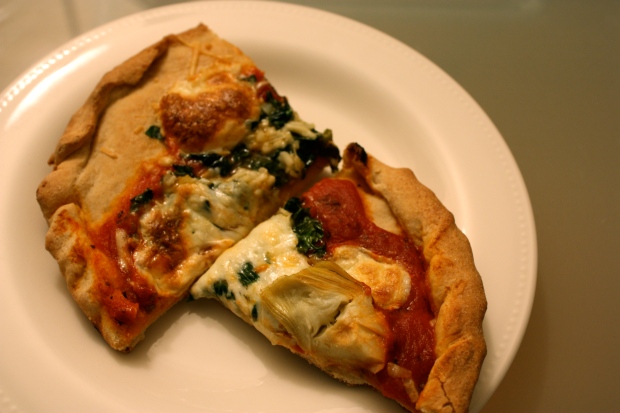 I also ventured and made Chocolate Chia Pudding… 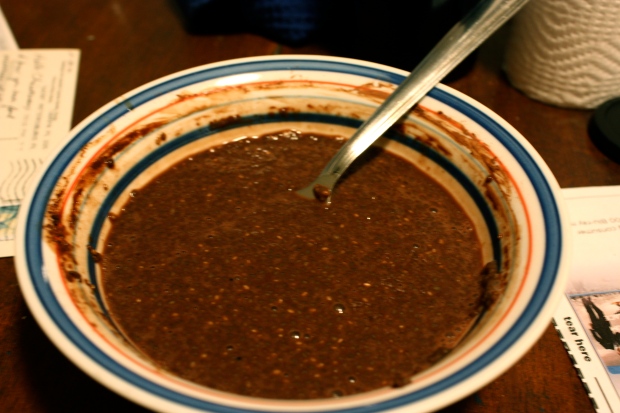 Sad to say this is the first bloggie recipe that I did not like.  I threw it away 😦  Oh well!  Can’t love them all!

Since today was full of slacking, tomorrow is a study day.  Dreading it already.  The Oscars are on tomorrow!  I can’t wait to see the dresses on the Red Carpet!

Have a fantastic night!!

Yesterday my schedule got all turned around!  I intended to go to class then work for an hour, go to an another class and stay on campus to study til 4 then come home a cook.  However, the second class that is usually at 12:20 got moved to 3:00 and went almost til 5:00!  I still managed to get a lot done in between but I was not prepared to stay on campus til past 5!

Anyway, when we last spoke, I was soaking black eyed peas…

Here’s why:  Rhoda, my friend who pops up around here all the time, is moving to Africa!  She threw a Rhoda is going to Africa party, where we all made recipes from her future home, Burkina Faso!

So I made Savory Bean Cakes! Not the healthiest but these could definitely be made healthier while still tasting delicious!

Cook and peel the black eyed peas.  Allow to cool.

Put all ingredients in the food processor and process until smooth.

At this point, I would allow your dough to cool.  I think this is where mine went wrong.  Form them into ball and flatten, essentially into patties.

Fry for about 10 minutes.

I guess I should also say that I’ve never fried anything before, so I don’t really know how to.  I think of myself as a pretty able cook for the most part but when it comes to frying… oh jeez!

Some were burn (oil too hot).  Some broke apart (should have let the dough cool… I think).

But they tasted great!  Beany and delicious!

Even though they weren’t fabulous looking, I took them to Rhoda’s for our Rhoda is going to Africa celebration.

There was a ton of tasty Burkinese food! Check out the spread:

Rhoda made this DELICIOUS Stew! 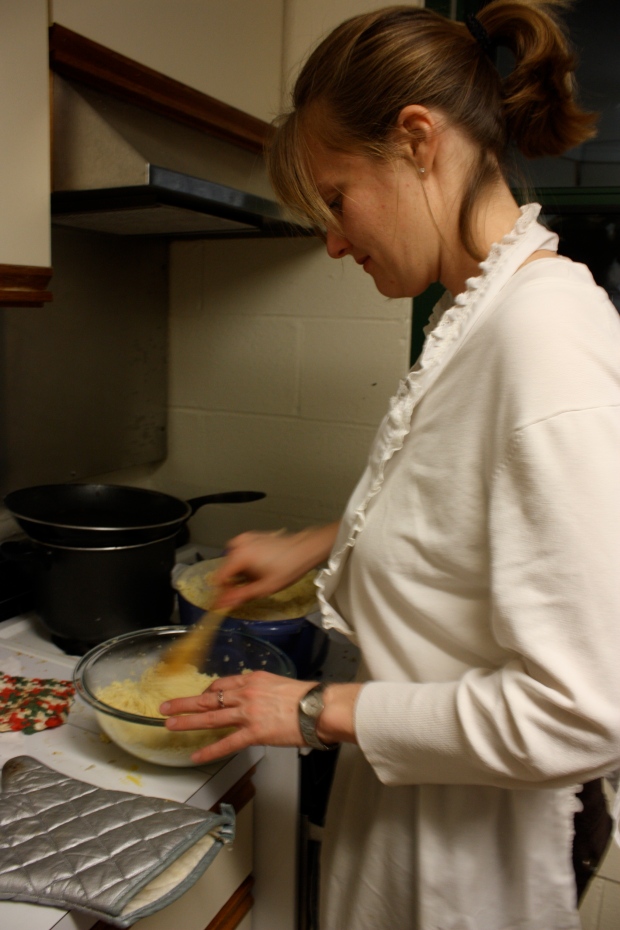 This stuff was dense!  I was full the entire night! (My two helping of dessert probably had something to do with that too!)

She also made a millet porridge for us to try!  I thought it was tasty!  Rhoda was apprehensive but she’s going to be eating it a lot in the next couple years apparently!

Julie made the same recipe as me!  Coincidence!  Guess there aren’t too many recipes from Burkina Faso out there.  She made hers with black beans.  They were delicious!  Amazing how two different beans can taste so different!

Liz made a tasty mango chutney to complement it all!  I believe she used this recipe.

My plate (definitely had seconds…)

Dessert were Sara’s brownies with fruit and hazelnuts!  Delicious! And Anna’s apple crisp (which I’m bummed I forgot to take a picture of!)

Sooo good! It was really fun to try out these new recipes!  Even if some of them didn’t turn out as expected… Are you a fan of trying to make things you’ve never heard of or do you prefer to have a point of reference (i.e. you’ve eaten it before) when you make something?

After dinner, we headed to a party at Sara’s house.  I danced it up a bit (Beyonce came on and you better believe I was all over it), but pooped out at about 12:30am.

Today is another sunny day!  Any fun weekend plans?