Lately, it would seem, that it has become my mission to make the perfect pie.

Let me explain a little bit as to how I came to this conclusion.

Friday, my eyes were extremely itchy and watery.  Allergies?  Maybe.  I took an anti-histamine to see if that would make it better.  Interestingly, my eyes began to hurt even more.  The only solution I could think of was making an eye appointment for the next day and going to bed… at 6pm.

I woke up the next morning, around 6:30am to severe eye pain, blurry vision and such light sensitivity that I could barely open my eyes.  My eye doctor appointment wasn’t until 11am.  After sitting in my room with the curtains closed, feeling somewhat like a mole rat…

I got a ride to the eye doctor.  Only for the doctor to tell say “Wow, your cornea look like meat!”

What do you say to that?

Oh, and how does this relate to pie?

Well, subsequently for the next two days, I couldn’t look at a computer screen, watch television or really spend a lot of time in the sunshine or other well lit areas (i.e. Wegman’s).  Instead, I decided baking would be a good idea.

I should also mention that my gift to myself for being sick was a pastry blender. 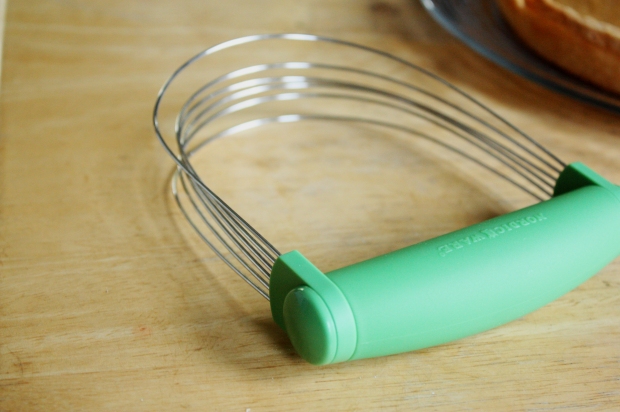 So that night, I made two pies:  Assorted Squash and Apple.

Assorted Squash Pie is basically a pumpkin pie but instead of pumpkin I used butternut squash and some other type (maybe a sweet dumpling squash?).

Then the apple pie.  I wish I could say it was amazing.  It was alright.  I used Joy of Baking’s recipe.  The crust is great.  The filling… eh? Not amazing.  It turned out runny. 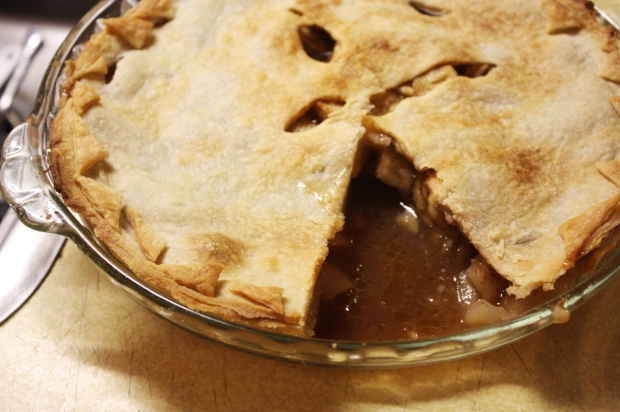 I was not pleased.  Plus the slices just looked a little sad…

That was last week.

Last night, I decided I needed to make another pie, because when you’re sick with the flu what else are you supposed to do?  Sleeping and resting doesn’t seem to be in my vocabulary. 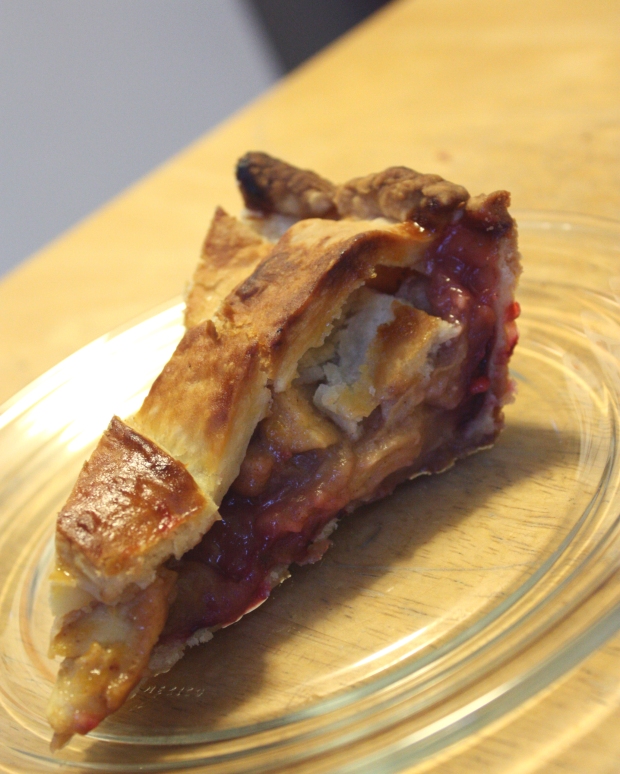 Peel and slice apples, sliced plums.  Combine in a large bowl with sugar, cinnamon, nutmeg and lemon.  Allow to sit for at least half an hour.  Toss with flour.  Place filling in prepared pie dish.  Put top on pie.  Chill in the fridge while oven preheats. Preheat oven to 425F.  Bake 45-50 minutes.

So this time I learned from the runny filling and used 3 tablespoons of flour and skipped all the simmering of juices and such.  I also learned that to keep your crust from shrinking you need to let the dough rest for a while so the gluten can develop.  A few hours in the fridge should do it.

I also learned that forgetting about your pie is bad.

It burns.  Funny how that happens, right?

So this pie neared perfection.  Except I burned the lattice top.

2 thoughts on “My Mission for the Perfect Pie”