I’ve been in my new apartment a week.  I’ve already used at least 7 sticks of butter and made at least 4 pies.

This was one of them.

Doesn’t this look like a dream?  I promise it’s reality.  Furthermore, it’s proof that burning things is not the norm for me.

I took it to a potluck, but was in a hurry so didn’t have time to photograph for a full blog post. I’ll make it again and legit photograph it and write a blog post about it (EDIT:  Here’s the recipe for the Milk Chocolate Brownie Pie above!).  But until then, I’ll tell you about this one:

I know.  I put bourbon in everything, but generally I think it belongs in most situations. In a pie.  In a cake. In a cup…

Honestly, you can’t really taste the bourbon, but it adds a little something extra.

Prepare pie crust by combing flour, sugar and salt.  Using your fingers, break the butter into the flour mixture until it resembles very coarse crumbs (even pea sized is fine).  Add ice water and bring it all together into a ball using your hands.  Wrap in plastic wrap and refrigerate a few hours.  You can make this up to two days in advance.

Once your dough has rested sufficiently, you can start to assemble your pie.  Roll our dough and place into a 9inch pie dish, trim the edges, make them look pretty if you’d like.

Next make crumble topping.  Combine dry ingredients.  Add butter and using your fingers work it into the mixture.  Drizzle in bourbon and toss to combine.  The mixture should look sort of like crumbs.

Next, pour the fruit filling into the crust, arranged sort of evenly and slightly mounted in the center.  Top with crumble topping, place on a baking sheet and bake 45-60 minutes (depending on your oven) or until the pie is golden brown and the fruit is bumbling.

Allow to cool completely and serve. 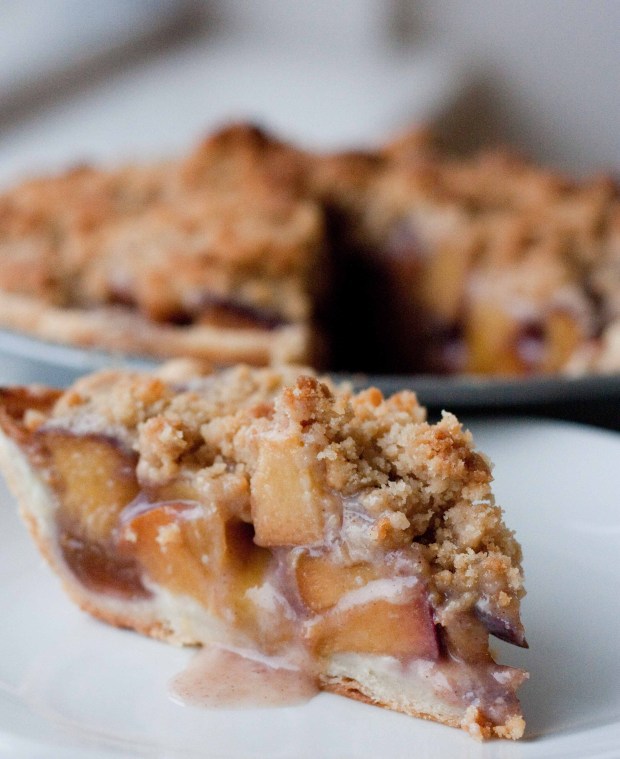 That’s all for tonight.

Don’t worry, I fully intend to use two more sticks of butter before the night is up.