So I’ve realized I eat more dairy than I thought I did or maybe that’s just what’s left in my fridge to consume.  So I’m finishing out my non-paleo foods before the 30 Day Paleo Challenge

I know you’re just as psyched as me.

I’m used to eating yogurt for breakfast.  So today was pretty typical… 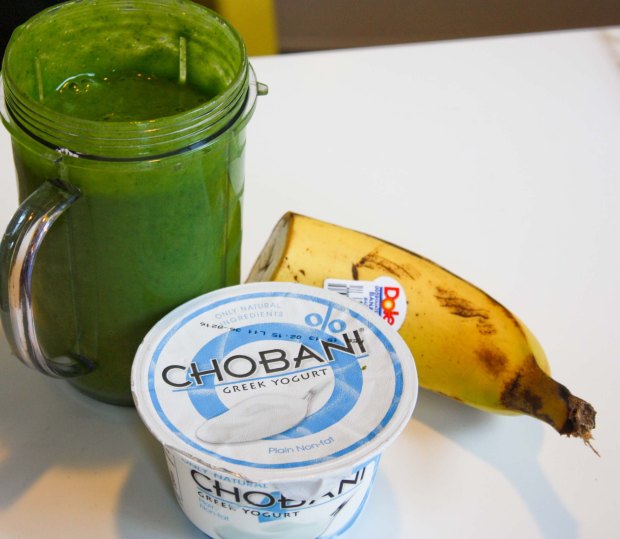 Green smoothie (1/2 banana, 6 chunks of frozen mango, lots of spinach, and water) + the other half of the banana and a Chobani.

An apple for a snack.  Then random boxed Potato Leek soup + cottage cheese with tomatoes and hot sauce on a tortilla.  That combo was wayyyy more delicious than I thought.  Since I still have a ton of cottage cheese left, that will be lunch tomorrow too.

After work, I headed to Costco to stock up on some stuff.

Honestly, the list wasn’t that different from what I normally buy.  The only difference is ordinarily I would buy Greek Yogurt and Cottage Cheese and probably some other type of cheese instead of any type of meat.

One of the criticisms I hear about  Paleo is that it’s expensive.  I spent $56.  That might be a little more than I would normally spend at Costco, but I’m thinking that ground turkey will last a while, and it was the most expensive item (4 packs for $17).

I’ll hit up the grocery store for some spaghetti squash later this week, but other than that, not a whole lot more.

I’ll keep track of the costs just out of curiosity.

How much do you normally spend on groceries?