I’ve been excited about the concept of my culinary bucket list ever since blogging about it last month.  I guess I should have set some ground rules… or really one important ground rule… the rule of perfection (or lack of).

Whatever I make on my culinary bucketlist might not be perfect, but I’ll try anyway.

The first item to check off the list: Monkey Bread.

Oh monkey bread.  I had no idea what to expect, because I had never eaten it (or made it).  It’s like a giant cinnamon roll stuffed into a bundt pan and covered in butter.

I did learn, however, that monkey bread (like cinnamon rolls) gets hard and dry after sitting out.  This is best devoured hot.  Straight out of the oven is best.

Mine wasn’t perfect.  In fact, when I turned it over, it got a little stuck.

Ok honestly, it was a bit of a mess…

I used a recipe I found online and make some changes (as usual). I added pecans because that sounded great. 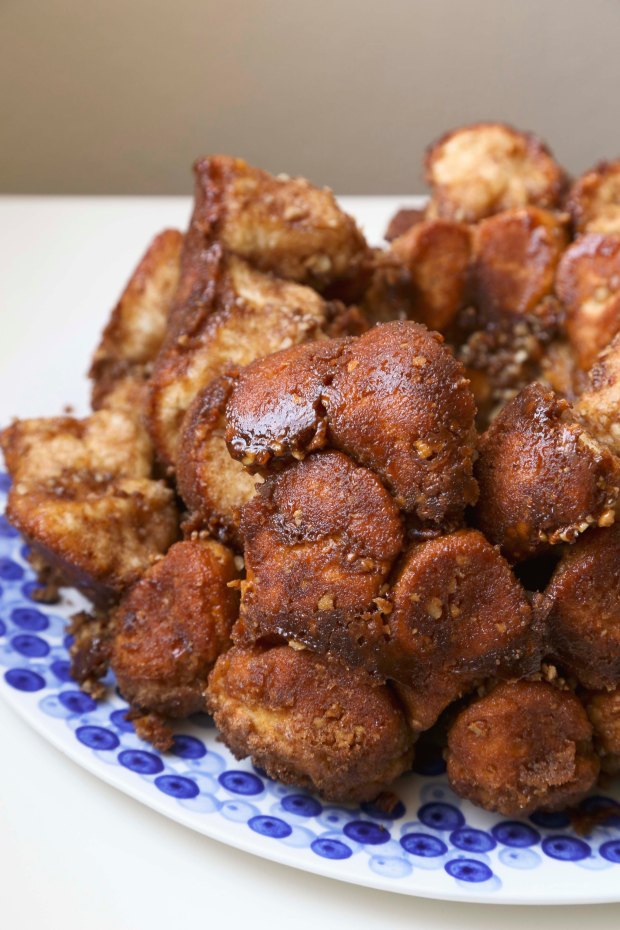 I skipped the glaze and that was a mistake.  I should have made the glaze, but it looked so intense on it’s own that I thought it wasn’t necessary.

I won’t share the recipe I used, but feel free to check out this recipe from Sally’s Baking Addiction that I based mine on.

Overall, monkey bread was tasty, but I don’t think I need to make it again.  It was intense, but maybe I’m just not a big fan of cinnamon rolls in general?

Next time, I’ll know not to skip the glaze.

Next on the Culinary Bucketlist/Foodologie is Thai food!  I’m off to Thailand for 2 weeks.  I’ll be back with updates, photos and tasty recipes… then when I return there will be some peanut buttery goodness too.

Lots to look forward to!

Are you a fan of Monkey Bread? or just cinnamon rolls? or neither?